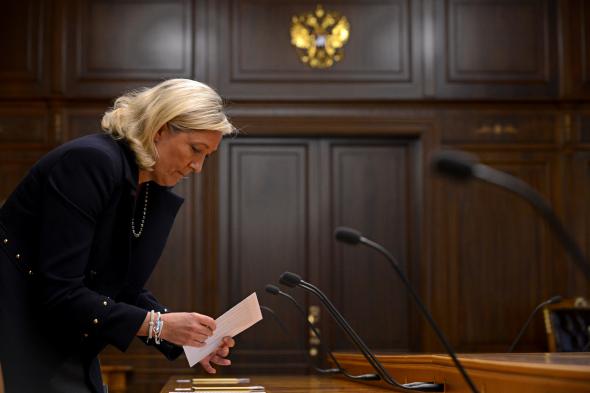 NIGEL Farage may be holding centre stage after last week’s European elections, but there is another player for whom success of the far right across the EU spells the culmination of three years’ targeting, cajoling and financing.

His glee this week hasn’t been heavily reported in Britain. He isn’t even in Europe.

For Vladimir Putin, the dismantling of the EU structure means getting rid of a club he cannot join, a threat to regional economic dominance for the Russian Bear, and ending the encroachment on lands considered to be Russia’s natural sphere of influence.

The gap between exiting the EU and seeing it completely destroyed and at the economic mercy of Moscow is not one that seems to worry Ukip however. Its candidate for Newark Roger Helmer, along with Mr Farage, deputy leader Paul Nuttall, Gerard Batton and William Dartmouth, have made the party the darling of Moscow with regular appearances on the state-owned Russia Today news channel

It might seem fanciful to think of the Russian premier as a Bond-esque “Dr Niet” figure, chuckling demonically in the wings as the dominoes he positioned fall into place one by one, but it is not far from the truth.

Putin has publicly declared his vision of a functioning Eurasian Union spanning from Lisbon to Vladivostok which would place Moscow at its hub.

So the Kremlin has been systematically building bridges with far right parties across Europe.

In Hungary the fascist Jobbik party, which prides itself on its Nazi-type uniforms, anti-Semitic rhetoric and hatred of the Government’s “Euro-Atlantic connections” rode last week’s whirlwind to emerge as the nation’s third most powerful party.

That success is concerning for the nation’s Jewish population.

“When a far Right party crosses the 20 per cent threshold that means they are a serious political force,” said anti-Semitism researcher Robert Wistrich of the Hebrew University.

Jobbik’s leader, Gabor Vona, is no stranger to Moscow. In May 2013, he was invited to address Moscow State University, and met with several Russian Duma leaders including Ivan Grachev, chairman of the State Duma Committee for Energy, and Vasily Tarasyuk,, deputy chairman of the Committee on Natural Resources and Utilization. Afterwards, it boasted on its website that the visit heralded a major “breakthrough” which made it “clear that Russian leaders consider Jobbik as a partner.” It is widely held that Vona ‘s campaign was partly financed in Rubles.

Unsurprisingly too, Vona has stated he wants Hungary to leave the EU and join a Eurasian union instead.

Bulgaria’s far right Ataka party is also a friend to Moscow, and documents revealed on Wikileaks laid the relationship bare. Party leader Volen Siderov called for Russia’s accession to the EU, and for the Government to “recognise the results from the referendum for Crimea’s joining to the Russian Federation.”

It is not just an Eastern European problem, however.

In Greece, Government attempts to rein in the extreme right-wing Golden Dawn party by stripping its members of political immunity and sending its leader Nikos Michaloliakos to jail failed to stem its popularity. Last week it romped through the elections with three MEPs on their way to Brussels.

Michaloliakos has always been open about his links to Russia and reportedly even received a letter of support from Kremlin advisor Alexander Dugin, the brains behind the Eurasian Union vision. According to Golden Dawn’s website, Michaloliakos “has spoken out clearly in favor of an alliance and cooperation with Russia, and away from the ‘naval forces’ of the ‘Atlantic.’”

In France, triumphant Marine Le Pen has publicly stated her vision of a Europe of independent nation states controlled by a tripartite axis between Paris and Berlin and Moscow.

The party recognised the results of the Crimea referendum and stated in an interview with Voice of Russia radio that, “historically, Crimea is part of Mother Russia.”

It was also in 2013 that Nigel Farage met Russia’s London Ambassador, Alexander Yakovenko. Two years before, Russia successfully boasted that its controversial  elections had been monitored by a British MEP. It was less vocal that the identity of the MEP was BNP leader Nick Griffin.

Since then, six Ukip’s MEPs have made appearances on Russia Today, with Farage making almost monthly appearances on the state sponsored news channel.

As with the other right wing parties courted by Moscow, Farage has publicly defended Putin’s Ukraine stance, and has declared the Russian premier the world leader he most admired “as an operator”.

Last night Paul Nuttall rejected any notion of Ukip joining a extreme right pact in Europe, adding: “It’s true that we’ve appeared on Russian television a lot, me included, but you have to remember that three years ago we couldn’t get a look in here in the UK.”

Ukraine is a classic example of how Putin is using right wing parties to lobby for support in Europe, said Anton Shekhovtsov, of UCL School of Slavonic and East European Studies.

“There is no doubt that the Kremlin uses the European far right. And it means more pressure being put on Ukraine,” said the Ukrainian national.

“As things are, Russia cannot compete with the EU in terms of economy, human resources, capital and IT– it’s only chance to dominate is if Europe is reduced to separate nation states. “

While direct financial backing is difficult to prove, there is little doubt that Moscow is holding the purse strings.

“Ideally, Moscow would like to be funding mainstream politicians, but this is expensive and difficult. It is much easier to focus on MEPs where restrictions are more nebulous,” he said.

“Though I believe Russia has been paying these extreme right parties handsomely for lobbying its interests in Brussels.”

Prof Mitchell Orenstein, head of the Department of Political Science at Northeastern University in Boston, called for European leaders to investigate external funding of right-wing parting.

“I really do not believe Putin’s challenge to Europe is being taken seriously enough. Brussels must begin looking at how these parties are being funded.

“Putin’s position regarding the Ukraine is one thing, but when it comes to the rest of Europe, he doesn’t need to resort to land-grab tactics. He can just sit patiently on the sidelines and watch as the far right tries to dismantle the EU once and for all.”