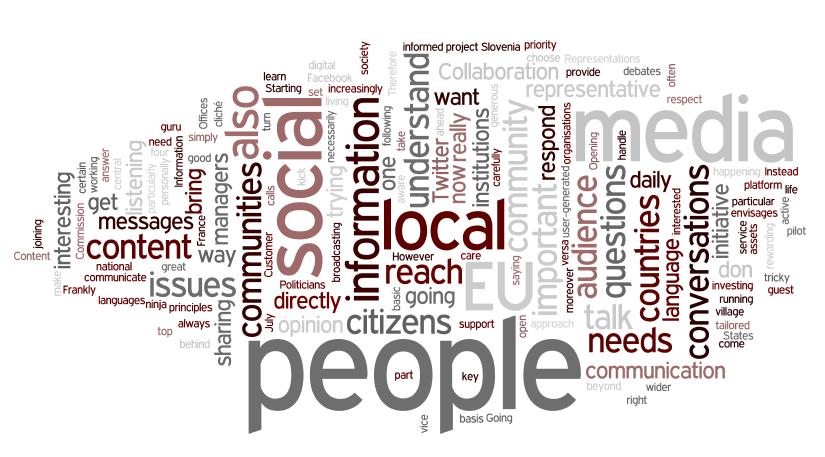 We are sharing our daily life experiences on social media, brands are fishing for our ‘likes’ and people are having conversations in what McLuhan calls the global village. Politicians and (EU) political institutions are also starting to understand the importance of social media communication, and moreover, listening. Instead of simply broadcasting messages to citizens, governments are trying to understand the needs and questions that people have, and what they really want to talk about, and respond to that. I personally don’t believe that active social media users are necessarily representative of a whole society, but they can be representative of certain communities, and those communities can in turn have a wider impact.

Engaging with citizens online doesn’t take a social media ‘guru’ or ninja. Common sense, some digital knowhow and basic tools, and an open, friendly approach are your key assets. However, increasingly, we are also beginning to understand the need to be able to reach out locally.

Using one central Facebook or Twitter can make it tricky to reach people in their own language, and particularly to communicate on the specific concerns and needs of citizens living in particular Member States. That’s why more and more Commission Representations and European Parliament Information Offices are now investing in local social media communication. As part of a pilot project, currently running in 17 EU countries, we are trying to learn and engage more with national social media, to bring people information on EU issues in a way that’s relevant for them and in their language, and vice versa, to be aware of what matters to people in different countries and communities.

The principles of good local community management are being applied on a daily basis, and in my opinion, the following four ideas are pretty important.

Customer service
Social media gives us a platform to respond to what people are saying – to answer questions, to provide information if they can’t find it, and to talk directly with people about issues that come up. Being generous with information – giving people access to ask questions and get quick answers from another human being behind a Twitter handle – is both rewarding and effective.

Content
Frankly, people in France don’t always want to be informed about an EU initiative happening in Slovenia. It’s a massive cliché but content is king. Therefore messages and information are carefully tailored to the needs of the audience – by having a channel to speak directly to a local audience, we can choose the content that’s more interesting and important for them.

Conversation
Starting or joining conversations is top priority – not just for people to talk to the institutions, but also to get debates and conversations started with each other about EU issues. It’s often up to community managers to kick off and support this, and to bring in people or organisations that might be interested.

Collaboration
Opening up to your audience means you care about them, and respect their opinion. Collaboration goes beyond listening; it also envisages co-creation of content – from guest blog posts, and sharing images, all the way up to user-generated campaigns.

So right now, that’s where we are with going local, and it’s proving to be a really exciting initiative, with great community managers working together to reach out. From 1 July, we will have 28 countries and 24 languages in the EU, so the road ahead for ‘going local’ on social media looks set to be an interesting, and important one.