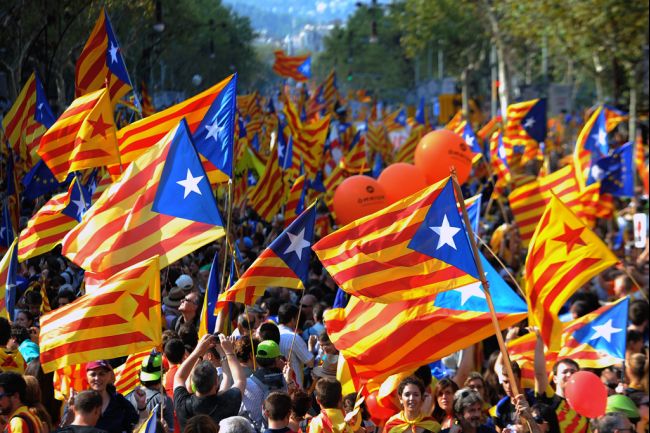 In April, the Spanish parliament rejected a request by Catalan authorities to hold a referendum on Catalonia’s independence from Spain, which had been proposed for November this year. Diego Muro and Martijn Vlaskamp argue that the Spanish government requires a more positive message for the people of Catalonia if it is to reduce public support for independence.

The Catalan secessionist movement may fail in bringing about the political independence of Catalonia, but it has already succeeded at one thing: getting their supporters’ hopes up. Within the pro-independence campaign there are many enthusiasts who willingly spend their free time collecting signatures, organising talks and attending rallies with the hope of realising a brighter political project for the future.

In contrast, the campaign in favour of the status quo is being carried out by the Spanish Government with the support of a handful of Catalan organisations and has been characterised by disdain, neglect and even intimidation. Unsurprisingly, the government’s negative campaign has failed to convince Catalans who want to go it alone.

Spaniards and Catalans against secessionism may have reasonable arguments but their discourse is too often limited to delivering criticism. Supporters of the status quo complain that secessionists are misleading Catalan citizens in presenting a rosy picture of the future. They grumble that the sustainability of new states is unclear and that the nationalists’ position over issues such as membership of NATO or the EU is little more than wishful thinking.

They also object that the harsh realities of the Great Recession have contributed to making political independence more attractive and that the real problem is economic, not political. If Spain was going back to providing high quality public goods for all its citizens, they hope, support for separatist dreams would fade away. These are all valid points, but ultimately the anti-secessionist campaign only delivers a negative message – why secession is a bad idea – while failing to offer arguments to the effect that staying together would be a better option.

One of the pillars of the Spanish Government’s campaign against Catalan secessionism is the international ostracism a Catalan state might face following independence. The Spanish Foreign Minister, José Manuel García Margallo, argued that an independent Catalonia would be ‘damned to wander outer space and would be excluded from the European Union for ever and ever’. The Interior Minister, Jorge Fernández Díaz, further claimed that political independence meant being outside ‘all EU treaties as well as NATO’ and that Catalonia would be a fertile soil for ‘international terrorism and organised crime’.

But such threats about international isolation will not be a game-changer. In a recent study funded by the Fritz Thyssen Foundation, we confronted 1,200 Catalan voters with various scenarios regarding the EU membership of an independent Catalonia. Even when confronted with a scenario of ‘EU exclusion’ more than 55 per cent of Catalans opted for independence (without this treatment more than 60 per cent of Catalans voted for secession). The Spanish executive should be especially concerned about the fact that even among Catalans who feel both Spanish and Catalan, and who tend to be less nationalist, more than 70 per cent intended to vote in favour of independence under these circumstances. Amongst those whose identity was ‘only Catalan’ support for independence was almost 100 per cent.

Our findings seem to suggest that for many Catalans even the threat of EU exclusion is not credible or strong enough to substantially change their preferences. As can be seen in the Chart below, support for secessionism remains largely stable in all identity groups despite the ‘positive’ and ‘negative’ scenarios concerning EU membership. Those with single identities (‘only Catalan’, ‘only Spanish’) are less likely to change their preferences for secession than those with dual identities (‘more Catalan than Spanish’, ‘as Catalan as Spanish’, ‘more Spanish than Catalan’). The findings therefore confirm the idea that self-identification and support for secession are highly correlated and that threats are not very effective.

Chart: Percentage of people in Catalonia who support independence under ‘positive’ and ‘negative’ scenarios over EU membership (by identity group) Note: The Chart separates respondents into groups based on their identity – from ‘only Catalan’ through to ‘only Spanish’. The percentages represent the respondents within each group who supported Catalan independence under three different cases – 1) when they were told Catalonia would not be able to join the EU, 2) when they did not have any direction on Catalonia’s future EU membership, and 3) when they were told Catalonia would be able to join the EU. Figures are from the authors’ study funded by the Fritz Thyssen Foundation.

The Spanish Government has not come up with an alternative strategy to counter the seemingly unstoppable rise of secessionist attitudes in Catalonia. Many of the grievances of ordinary Catalans are quite similar to those of otherSpaniards and they can be fixed, if there is political will. According to pollsconducted by the Catalan Government, the ‘relationship with Spain’ is not even among the top problems of Catalan citizens (only 20 per cent of the respondents mentioned this issue and not more than 8 per cent of them ranked it first on their list of priorities). Catalans mostly care about unemployment, general economic problems and political corruption: issues that score just as highly in the rest of Spain.

The secessionist campaign in Catalonia has managed to create an appealing movement driven by positive messages about the real chance of ending these grievances ‘right here, right now’. The Spanish Government cannot counterbalance this democratic movement by disregarding popular demands, not engaging at all (PM Rajoy’s favourite strategy), or bullying Catalan voters with ineffective threats (as our research has suggested).

Instead, Madrid-based politicians need to come up with specific proposals about a Constitutional reform, a new funding system, protection of language rights, and improving health and education, among other areas, instead of barricading themselves behind the legal status quo. Either that or they will continue to throw more wood into the bonfire of secessionism.

But even if Spanish politicians are quick to react, it is doubtful that the ardent desire to secede can be calmed down at this stage anymore. By not engaging in a constructive way with the problems, the Spanish Government has enabled secessionists to create such a momentum that most Catalans now want to express their frustration in voting, whether in a referendum on November 9th or in snap elections.

Will Madrid be able to offer a positive political project capable of keeping the country united? Calls for profound reforms and changes are not unique to Catalonia, but are also voiced in the rest of Spain. Spaniards mistrust key political institutions (governments, parliaments and political parties) and there are signs of exhaustion with respect to the current political system, as indicated by the emergence of new parties, increasing social mobilisation, and unprecedented rates of political disaffection.

Recently there was misplaced hope that the new King Felipe VI would be able to initiate a ‘second transition’, similar to the one his father contributed to when Spain was transitioning to democracy in the 1970s, but the monarch’s powers are largely ceremonial. In the end, politicians and representatives will ultimately be responsible for coming up with specific proposals to regenerate Spanish politics and accommodate Catalan aspirations. If these proposals are crafted in a positive manner, they may convince more Catalans than the current negative campaign of indifference, contempt, and intimidation.