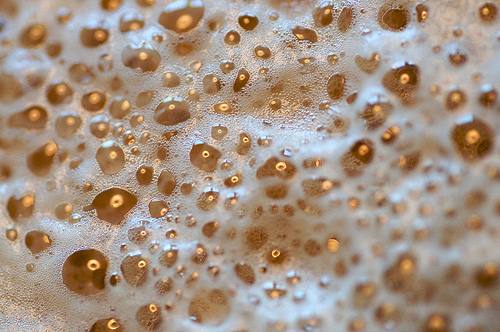 The EU bubble is a self-created illusion, and those who remain in this bubble simply fail to acknowledge that this bubble has actually become part of a foam over the last years. There are many bubbles in which European topics have found a place, and the foam of European spheres is all across our lives. There is no absolute need to build explicit bridges, because the bubbles in this foam are already connected, if not by links then at least by related meaning. All it takes is to understand and discover these relation by making a little step to the next bubble in the foam.

Take a step and discuss on a Maltese blog why inmates should be able to know their rights in the EU. Argue on a Portuguese blog why Portugal may still break with the Troika. Tell an Estonian blogger why his predictions for the mega-election Sunday in Europe were wrong.

Go and convince this Romanian blogger why Greece will not collapse and why the European Union will therefore survive, too. Contradict a Bulgarian blogger and tell him why the Turkish-Bulgarian EU border is not as unguarded as he finds it. If you prefer a decent argument in English, you’ve got a chance to tell a Dutch blogger why The Hague might still be the beginning of a European Spring.

Or, if that’s too easy for you, you may want to let to know a leftist Swedish blogger why the election results in France and Greece will not be the end to the Fiscal Compact. Agree with a German blogger who explains why you should applaud the European Parliament for passing a resolution against patenting human life. And just across the border, you may wonder together with a Polish blogger why the Polish should support Greece although Poland itself is not considered to be a very rich country.

Maybe you would also like to ask a French blogger why he uses a photo of Barroso to open a discussion on the future of the leftists blogosphere in France now that Sarkozy is defeated. On the other hand, you would not want to miss an amazing Spanish blog posts that tells you why we should stop focussing on “big” European politics and instead care for those that need attention, such as the victims of the Lorca earthquake last year. But than again, isn’t it more important for you to contemplate together with a Czech blogger on why Brussels bureaucrats have to resort to supporting “civil society” while the Chinese government actually takes decision with undeniable direct effects?!

Twelve countries, twelve blogs, 10 languages. None of these blogs is part of the EU bubble, none of them is focussed on EU affairs. Yet, all posts linked above discuss EU and wider European politics. They are part of a European blogosphere, without being written on explicit “Euroblogs”. Especially those bloggers who discuss the crisis and the economy almost naturally discuss national, European and transnational issues within the distance of one breath, one line of text.

All posts linked above have been published within the last two weeks. All were found and read with the help of Google and Google Translate. So there are relevant discussions ongoing, and one can find them. It’s a little work, I admit, but it’s comparatively easy.

EU politics may happen in a bubble for those who live in this bubble, but European discussions have become connected bubbles through the crisis and formed a European foam nevertheless. If you are part of one of these bubbles, you may not actually notice that you are part of this foam, but once you leave the micro-perspective, you realise that there is more European public sphere than you can see from where you were before.

The problem is that, in order to get to that point, you cannot just complain about the bubbleness of your own bubble. You have to go on a journey. That is why you should continue blogging, Mathew. However, if you want to create a European Online Public Sphere, you should actively look for it, write about its presence, not about its absence and the abstract need to create it. Because it is already there, right in front of your eyes, so there is no need to create it actively. By blogging about it, you can confirm and re-enforce the existence of this already existing sphere, but that is not its creation, it’s just a bird’s-eye view on it.

Why discuss this at length? Well, on Wednesday I wrote that I did not take any idea from re:publica. This was however not true. The idea I took from re:publica was to simply open my eyes and blog about European politics and restart reading new blogs, restart searching for interesting blog posts, discover what is already there. Because the European Public Sphere will not emerge through divine creation and fancy projects. The connection of the bubbles does not come from building bridges but from discovering these bridges. European blogging is part of this discovery tour – and it’s time to travel again!

Ronny Patz, co-editor at www.bloggingportal.eu (first published 11th of May, 2012)