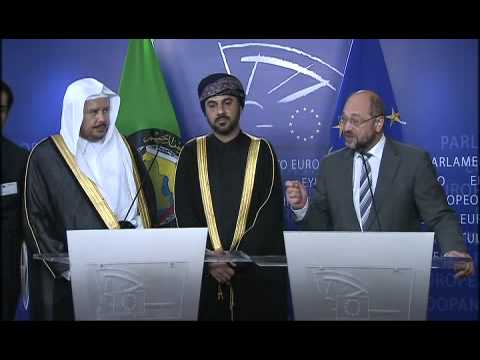 In a moment where a lot of attention is being paid to the Transatlantic Trade and Investment Partnership (TTIP), it is also important to bear in mind that the European Union (EU) was also negotiating, for 10 years, a Free Trade Agreement with the Gulf Council Cooperation (GCC).

Over the past few years, the world has assisted to the outbreak of new poles of attraction in the Middle East, namely Dubai in the EAU and Qatar. The main reason why these new poles emerged is simple: oil. The oil revenues from the exports allowed these States to build great and modern cities in the middle of the desert, allowed them to improve the life standards of their citizens and allowed them to have a more significant role in the world. As an example, Doha, Qatar’s capital city, hosted in November 2012 the Climate Change Conference, which may show their commitment on having an international louder voice.

The development of these States causes an impact within the EU because it affects the relations between the two, especially the economic and the political ones; trades become more intense, therefore we need to pay close attention to these new emerged economies and the GCC may become an important political ally to the EU especially when they look at the integration and cooperation process as a model to follow.

The Gulf Cooperation Council was founded in May 1981 and it is a regional organization composed by United Arab Emirates, Bahrain, Saudi Arabia, Oman, Qatar and Kuwait. This organization intends to be a cooperation between its Member-States on the fields of “economy, politics, security, energy, industry, agriculture, health, education and culture”. The relationship between the GCC and the EU has begun in 1988 when the parties signed the Cooperation Agreement and have been reinforced by the Joint Agreement signed in 2010. “Both sides are committed to negotiations towards a Free Trade Agreement which were initiated in 1990 and gained momentum in 2007”. It must be also noted that the GCC is experiencing a similar process to the one of the EU, a similar integration and cooperation process. One of the objectives with these agreements is to contribute to strengthening stability in such a strategic region and to facilitate not only the economic relations but also the political ones.

The GCC is currently the EU’s fifth largest export market; meanwhile the EU is the first trading partner for the Gulf countries. “EU exports to Gulf Cooperation Council are diverse but focused on machinery and transport materials (46.5%), for example power generation plants, railway locomotives and aircraft as well as electrical machinery and mechanical appliances; EU imports from Gulf Cooperation Council are mainly fuels and derivatives (81.9% of total EU imports from the region in 2011)”.

What these negotiations between the EU and the GCC seek is a gradual liberalization of trade, namely in goods and services, also considering the level of development of both entities. In this aspect, one must take into account that the EU is far more developed in comparison with the GCC. This is important especially when the Joint Agreement was subject to a public sustainability assessment and also due to the consequences that may derive from the liberalization and FTA. The position paper Trade SIA of the EC – GCC Negotiations, from 20 March 2006, studies the trade sustainability impact assessment of the trade negotiations between the European Commission and the Gulf Cooperation Council. The objective of the position paper is to inform “negotiators of the potential economic, social and environmental impacts of a given trade negotiation, using analytical assessments and consultation processes”. Although there is a final report, released in 2004, the European Commission has decided to “present its official position on the challenges identified in this Trade SIA”.

The European Commission and the GCC are in current negotiations in order to reach a Free Trade Agreement that includes a liberalization of trade in goods and services as well as the reduction of non-tariff barriers and on trade rules, as for example intellectual property and competition. This liberalization of trade intends to promote the economic welfare in the GCC countries, which, in an overall sense, is an advantage to the European countries. Also, in the social level, the Free Trade Agreement will cause an impact, particularly on the job market countries. “Positive employment impacts of the EC-GCC FTA are likely to occur in relation to liberalization of services e.g. business services, communication services (…) These are all sectors where medium to high skilled manpower is required”. Therefore, the liberalization of the demand by the public will most likely promote social development, since it brings a “boost” to the job market in the GCC countries.

The FTA may bring some political changes to the GCC countries because this agreement became much more ambitious than a simple trade agreement. Therefore, we must consider some important aspects, for example, the negotiations of the FTA took a long time to begin since there was plenty of bureaucratic inertia and the fact that neither side had much experience in bloc-to-bloc trade negotiations; for several years, the EU referred to the fact that GCC member states did not have a common external tariff to argue for the for a slowdown in the negotiations; by the time GCC member starts reached agreement on a common external tariff, the EU had already introduced new political demands in their negotiations. One of the first political clauses referred to the illegal labor migration, but several other political clauses were introduced such as democracy, human rights, weapons of mass destruction and terrorism. The imposition of such clauses cause a serious delay in the negotiations, however, none of these reasons should have been enough to motivate the delay of the conclusion of the agreement. Although, we must have in mind that the EU has put forward the FTA as the conglomerate framework for its overall policy towards the Gulf region that attempts to bring all relevant issues under one single umbrella and “because of the strategic importance both sides attach to the relationship, the FTA negotiations have taken on a shape and significance that go beyond those of a traditional FTA agreement. This factor, along with the fact that neither side has ever concluded a bloc-to-bloc FTA, has led to a delay in concluding the agreement”.

Since the GCC member states approached the Common Market on the 1st January 2008 and are aiming to reach a single currency, the pressure for greater integration is as intense as ever, mainly when the Euro zone is facing such an economic crisis and exportation can be part of the solution. There are at least three important instruments towards the Middle East and European cooperation: the Barcelona Process, the European Neighborhood Policy and the Strategic Partnership for the Mediterranean and the Middle East. For the GCC countries the last instrument is the most important one in terms of cooperation.

Each new presidency of the EU Commission reinforces their commitment towards the implementation of the FTA, such was the case of the Finnish and German presidencies. One cannot say that despite the fact that the FTA has not been agreed on so far that nothing has been done since the beginning of the negotiations. In fact, negotiations rounds have been resumed in 2002 and have had a quite intense pace: there were five negotiating rounds in 2002, two in 2003 and three in 2004. In 2004 there were formal negotiations and technical meetings. Moreover, we must take into account that there is a very significant benefit of an EU FTA is that it may help consolidate the GCC’s own regional economic integration process, which the EU sees as an important instrument for peace, stability and prosperity in the region. The EU has a lot to offer to the GCC region in terms of their historical experience but the EU needs to move beyond its mentality of seeing the GCC solely in the framework of the US dominant role in the region. Instead, the GCC must be seen as an asset that can provide more than commercial contracts and better trade relations.

The GCC countries, on their own integration process, can learn from the European model. “The GCC already guarantees freedom of movement, residence and establishment among its members, another step that is similar to the European model”.

In essence, one of the biggest problems that we find in the conclusion of the FTA is that it evolved beyond a simple trade agreement into an economic start to a much more political cooperation process, referring, of course, to economic and trade aspects of the agreement, but also to aspects related to human rights, governance and security. The EU insists on the fulfillment of non-trade-related conditions in order for the FTA to be implemented.

The partnership between the GCC countries and the EU has plenty of advantages for both sides, as it was previously mentioned. The EU would boost its credibility in the rest of the Muslim world for being an even-handed and trustworthy partner. By so doing, the EU would gain an advantageous position in the international scene. Political dialogue should be followed by intimate economic and trade cooperation, which would allow stronger economic growth for the both regional blocs, as well as more democratization in the Gulf peninsula.