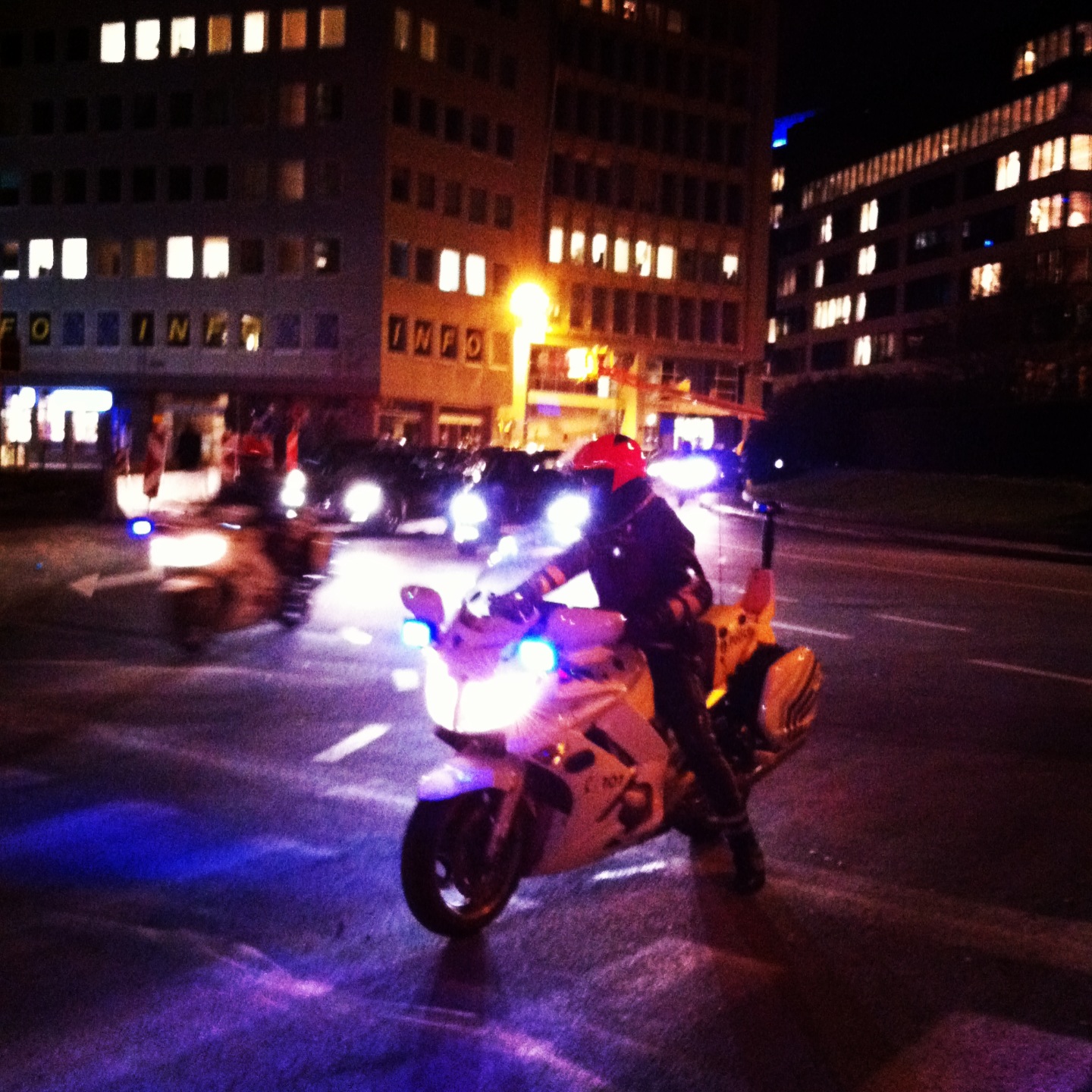 I’m not quite sure how I came to be reading the latest annual activity report of the Brussels Ixelles police force (Ixelles is a commune of Brussels, near the centre).

However I did come across some interesting statistics. The report lists the number of hours spent annually in providing police escorts for ‘Presidents, Ministers, and other VIPs’.

Those who live in Brussels will be familiar with the sight – and sound – of VIP convoys heading across town. One or more big black limousines is accompanied by a phalanx of police motorcycle outriders, who alternately zoom ahead or drop behind, blocking traffic at junctions with whistles and flashing lights, in order to let the VIPs pass unhindered through the rush-hour traffic.

They look pretty cool, and usually lend a certain panache and swagger to their maneuvers, aided by the inevitable black sunglasses. The constant convoys can be tiresome for those exposed to this on a daily basis. And it is on a daily basis: Brussels has an awful lot of VIPs.

One reason is the number of levels of government here.

A ‘Minister’ in Brussels can mean a federal (i.e. national) Minister, or a Minister in one of the three regional governments (Brussels-Capital, plus the Walloon Region and Flemish Region, both based in Brussels as well), or the French-speaking Community (the Dutch-speaking Community is merged with the Flemish Region, just to add to the confusion). Then of course there are the EU VIPs as well – national Ministers from all across Europe, here for EU meetings. Then there are the European Parliament VIPs and other dignatories. And of course the European Commission – each of the 26 Commissioners has their own driver and car to allow them to zoom up rue de la Loi (it would be much quicker by bike or metro of course). And not forgetting the diplomatic corps. There are huge embassies all along some of Brussels’ broad, tree-lined avenues, with delegations from around the world occupying huge, art nouveau mansions. There seems to be a rule that the smaller the country, the larger the embassy building, although it may just be that the bigger countries are a bit more discreet as a result of security concerns.

A ‘President’ can mean a Minister-President (regional level) a national President from another country who might be in town, or one of the European Presidents – the Commission, Council and Parliament each have their own President of course. Belgium is a monarchy, so no national President here, but  the royal family need to move around town too – the King’s official palace is an anarchist’s stone’s throw away from where I work in town.

I’m not sure who counts as a ‘VIP’ deserving of an official convoy, but there must be a lot of them too. Because in 2009 the Ixelles police spent no less than 6557 hours in escorting these convoys. Now that’s a lot. But by 2010 the figure had risen to 9499 – an increase of 44% in one year! Now that’s a lot of Ministers, Presidents and VIPs, not least because Belgium didn’t actually have a government in 2010.*

9499 hours per year already means that the Ixelles police are spending 26 hours per day providing VIP escorts, which is an impressive effort.

At the current rate of increase, I estimate that by 2020 the police will be spending nearly 250,000 hours per year on escorting VIPs. We have a lot of Ministers, Presidents and VIPs, but there’s no way they can keep up with the demand, even if they all spent 24 hours per day driving around Brussels. Obviously, this means that we are going to need a lot more VIPs, Ministers and Presidents.  In fact, we will all have to be VIPs, with our own outriders to clear the traffic every time we go out to the shops.

Of course, even the current level of police escorts does seem absurdly huge. And bear in mind, that these 9499 hours are just the figures for one of Brussels’ communes (there are 19 in total!). This is all part of a trend towards greater levels of security for our politicians… as they become more and more unloved.

There are two responses towards the increased security threats which our leaders face. One is to find more and more remote, and secure places to meet. Hence the retreats in difficult to reach, easy to control places like Davos or the UAE. But I think that Brussels’ response is much smarter. Rather than isolating the VIPs, here they are safely hidden in plain view. After all, with so many convoys of political nonentities patrolling the streets of Brussels, another black limousine attracts no attention at all from the casual passer-by. It could be a minor diplomat from a low-ranking country, or a mid-ranking official from one of the regional governments. Or it could be Francois Hollande, sweeping into Brussels to a high-level meeting with Merkel and whomever is Prime Minister of Greece this week. But either way, no one is going to notice.

Simon Wilson, a freelance consultant at Mojo Working and an external Director at Edelman Brussels.

* ok, not exactly true I know. We did have an acting government it’s just that it took over a year post-election to reach agreement between the parties about forming a new one.