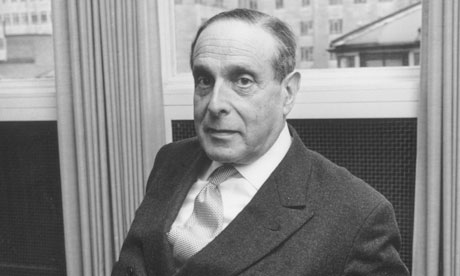 As a young man in the Germany of the 1920s, Warburg had been a convinced and optimistic pan-European.

He believed, as he wrote to his friend Ernst Kocherthaler in 1927, ‘that Europe has passed the culmination point of nationalism, or rather particularism, and is moving with very slow steps in the direction of consolidation’. He discussed with Coudenhove-Kalergi ways of linking the latter’s Pan-European Movement to the contemporaneous campaign for international disarmament. Among Warburg’s proposals at this time was one for ‘a central European ring of states united through a court of arbitration with pooled sovereignty in military matters and consisting of Germany, Holland and the Scandinavian states etc. Ten years later, with Hitler’s dictatorship firmly established and radical nationalism in power all over Central, Southern and Eastern Europe, such notions had come to be seen naive.

If anyone could claim to be the father of the Eurobond market it was Siegmund Warburg.

Throughout his adult life, he was convinced proponent of European economic and political integration. In the 1920s and 1930s, he and other family members had been generous supporters of the Pan-European Movement founded by that flawed visionary, Richard, Count Coudenhove-Kalergi. To Warburg there seemed no necessary conflict between transatlantic financial integration, his principal preoccupation in the post-war decade, and European political integration. On the contrary, the experience of the 1920s seemed to suggest that they were complementary processes. It had been when capital was flowing across Atlantic under the Dawes Plan that the prospects of Franco-German rapprochement had seemed rosiest. The breakdown of the global financial system in the Depression had been followed in short order by European disintegration. A second lesson Warburg had learned from the 1930s, however, was that explicit calls for European union were unlikely to succeed, no matter, how benign the economic climate, because of the resilience of nationalism throughout the continent. That had been the fatal defect of Claudenhove-Kalergi’s strategy. By the post-war period, Warburg had become convinced that the only way to advance the cause of European integration was by economic means – reversing Europeans into a united Europe through the back door of commercial and above all financial integration. Given his outlook and ambitions, it is not surprising that it was Warburg who was the driving force behind the creation of of the Eurobond market. In its technical design – a supranational market that could coexist with continued national limitations on capital mobility – and its covert political function – as an aid to European confederation – it epitomised his Weltanschauung.

The rise of the Eurodollar and Eurobond as an early step in the direction of financial globalization.

Earlier accounts have emphasized the role of Bank of England in liberalizing the London market for so-called offshore foreign currency transactions, at a time when most other financial markets were becoming , not less, regulated. But the birth of the Eurobond was also a major breakthrough in the history of European integration – though one largely unforeseen by the statesmen and technocrats Alan Milward has called the ‘saints’ of the European Union’s formative years. True, the Treaty of Rome envisaged reducing the restrictions on the free movement of capital between member states ‘to the extent necessary for the proper functioning of the Common Market’, However, the European Commission, the EEC’s executive body, did not act as if it attached much importance to this. Its First Directive on capital controls aimed to liberalize only flows associated with trade within the EEC, direct investment or investment in listed shares. Although the 1962 ‘Action Programme’ aimed to relax capital controls by the end of 1965, the Second Directive on capital controls was an empty gesture and a Third Directive was stillborn. National governments with few exceptions remained wedded to capital and exchange controls. The development of Eurobonds market was thus a largely spontaneous result of innovation by private sector actors, with some help from Britain’s permissive monetary authorities. Within a few short years, the genesis and growth of this market transformed the European financial system, forging entirely new institutional links and networks across national borders. Nevertheless, it remains a largely unwritten chapter of post-war European history, rating literally no mention at all in most recent textbooks on the subject.

There was an important political dimension.

For in many ways the Eurobond market was as much a device for advancing Europe’s political integration – and, in particular, reinforcing the case for British membership of the EEC – as a means of making money.

To Warburg, however, this was merely a beginning. His ambitions was to see an end to the kind of exchange and capital controls that persisted in all save the West Germany economy throughout the 1950s and 1960s. He encouraged the ECSC High Authority to enter the international capital market as a borrower, in the belief that this might enhance its standing as well as increasing its resources, while at the same time enticing American private investors to follow their government’s lead in financing European recovery. In 1957, after the long and difficult negotiations, these efforts bore fruit with the issue in New York of a $35 million bond issue for the ECSC. Another somewhat larger loan followed in 1958, a third for $25 million in 1960 and a fourth for the same amount in 1962. Warburg also sought to encourage the European Atomic Energy Community (Euratom) and the European Investment Bank to raise funds on the New York bond market. He explicitly characterized such transactions as ‘a small contribution’ to the process of ‘European Integration’.

By the end of 1950s, the Warburg was feeling distinctly disillusioned by the institutions that had been set up to promote European integration.

The ECSC, Euratom and the EEC itself, to say nothing of the European Investment Bank. He feared that the continent was heading towards ‘a time of renewed crisis in intra-European relations’. He detected only ‘inertia’ and ‘intrigues’ in Brussels and Luxembourg. These were intimations of the stagnation that was to afflict the official integration process throughout the 1960s. To be sure, as president of the European Comission between 1958 and 1967, Walter Hallstein strove energetically to implement the terms of the Treaty of Rome by enhancing the power of the Commission. But his efforts to not seem to have impressed Warburg. Even less encouraging was the diversion of the EEC’s energies (and most of its resources) into what ultimately emerged as the Common Agricultural Policy, a system designed to protect French and German farmers from anything resembling the free play of market forces. With the French pressing for protective tariffs and the Germans pressing for artificially high prices, Europe embarked on the worst kind of economic integration, based on price supports, stockpiling and protection.

In the memorandum of April 1968, he excoriated the degeneration and dissipation of the various EEC institutions:

A narrow-minded bureaucracy working in a kind of ‘luftleerer Raum’ [airless space] – a sort of meaningless vacuum unattached to any super national or national authority – has replaced what was genuine and enthusiastic European organisation operating within a sound and efficiently functioning framework. What makes the present situation especially bad is the division of the European Commission into various sections, partly located in Brussels, partly located in Luxembourg. Whilst the Commission as such and its various industrial sections, in particular coal, steel, and energy, are operating from Brussels, the Finance Section and the Administration attached to the European Parliament are operating from Luxembourg, with the European Parliament as such meetings in Strasbourg. In fact there are apart from the Luxembourg sections about thirty different sections or groups in Brussels which are badly co-ordinated or not co-ordinated at all and which are torn to pieces by intrigues either emanating from Brussels or caused from without through the Governments of the six EEC member countries.

As he explained in an interview in 1970:

Today the chief characteristic of the European Economic Community is clearly the tariff wall which is erected around it and which, of course, would be still higher if it had not been for the Kennedy Round (of the General Agreement on Trade and Tariffs]. Within the borders of this tariff wall little has been achieved towards the creation of common European endeavours in the field of helping under-developed areas or towards a European currency. Indeed the European Economic Community has at present more of an inward than of an outward-looking image. In these circumstances Britain has to be very careful about joining a movement which may be rather retrograde than progressive. Only if we should succeed in becoming members of a European Community in which the emphasis would be less on building up a joint tariff wall and on agricultural subventionism than on the constructive pooling of the great human resources in Europe in tackling big tasks both within and beyond Europe would I be in favour of Britain becoming part of the Common Market.