This episode focuses on an exiled whistleblower from Latvia, who may have uncovered one of the largest frauds that ever occurred in the EU. John Christmas is an American-born banker, who studied in Chicago before moving to Latvia to work at Parex Banka.

During his time at Parex, John discovered that part of the assets on its balance sheet were fraudulent loans, which the bank was making purposefully. Moreover, he found out that some loans were handed out to figures within the Russian Mafia and other shady figures with links to the Kremlin. As early as 2004, John reported these frauds to the Latvian authorities. In particular, he entrusted minister of the economy Krisjanis Karins which he knew through the Latvian American community. Mr. Karins’ wife, was in fact John’s doctor. The image below is the documented mail demonstrating Mr. Karins as the first person to be informed about the whistleblowing (source: lawlesslatvia.com)

To his surprise, John has emphasized that Mr. Karins (current Latvian PM) did nothing about these frauds, and rugged them under the carpet. Instead of recognizing Christmas’ findings and providing adequate protection, the exact opposite occurred: From that moment onwards, John Christmas would become the most vilified person in Latvia.

In 2008, when the Global Financial Crisis hit the world, Latvia was not spared. But unlike other major banks around the globe, Parex did not collapse due to mismanagement and wrongful risk-taking. It was the looting of assets by organised crime, that killed its balance sheet in the first place, and caused the IMF and EC to intervene with €7.5 billion euros , of which at least €2 billion has vanished into fraudulent pockets, according to John’s estimates. This seems accurate given the amount spent on Reverta, which received at least €1.7 billion and – according to Baltic Times – recovered less than €1.1 billion thus far. But this is not all, as Latvia had to increase its public debt substantially as a consequence. Arno Wellens, Mauro Caterina and Stephen Komarnyckyj are among the only journalists who covered this scandal into detail. Wellens managed to cover some very important parts of a leaked Nomura report which was obtained by a Latvian journalist in the first place. The report has been designated as state secret (since 2011), which is apparent from the first page of the Parex restructuring report. Even though the report claims to shed light on previously secret information, it has withheld one of the key aspects, which is the secret put-option (see paragraph below). In addition, Komarnyckyj has written an extensive bundle of articles on the Parex ‘restructuring’ and the corrupt actors involved at ByLine in a series called The colour of Russian Money.

Needless to say, a genuine investor would never want to invest in or bail-out a bank with such a composition. Therefore, the European Bank for Reconstruction and Development stepped in. This development bank was founded Its’ official narrative is that it acquired 25% of Parex’ shares. Wellens and Komarnicykyij have both explained how that was fraudulently achieved, by secretly signing a put-option agreement between the EBRD and the Latvian state. That put option was mentioned in the Nomura report and can be seen in this link from research firm 925. Eurostat itself has denoted the reversal of this secret put option as a “(deficit increasing guarantee call)”, ironically written between brackets on page 31 of a 2018 report describing Eurostat’s findings on Latvia after visiting the country from 7-9 June 2017.

The person who approved the fraudulent bail-out of an equally fraudulent bank, was then PM Valdis Dombrovskis, as visible on page 11 and 12. In 2014 he was promoted to EU Commissioner, and is now responsible for ‘An Economy that works for people’. But which people? A closer look at his portfolio reveals that he is currently responsible for managing relations with the EBRD and the European Investment Bank. In light of the Parex scandal, it is an incredible conflict of interest: the EBRD must be aware of his approval of a fraudulent deal, and likewise he must be aware of the secret put options used by the EBRD since he approved the deal.

But how much does such a put option cost?

In the case of Parex, it was 22% of the ‘loan’, which boils down to around 22 million euros. But the real figure is even higher, as the Latvian government bought back this ‘equity stake’ in 2014 at a price of 88.2 mln euros and sold it to investors at 74.7 mln, seen on page 31 of the 2018 Eurostat report referred to above. This means Latvians have at least paid €35 mln, on top the price for of the cost to European taxpayers as a whole, for a bank that has laundered billions. Recall that Article 6 MAR exempts certain institutions. Precisely the institutions in this situation are covered, as can be seen below, marked in orange, or in red if particularly relevant in this case. These exemptions make it all the more difficult to scrutinise the dealings, even though fraud has been thoroughly confirmed. The article also overlaps largely with Mr. Dombrovskis’ portfolio.

Meanwhile, recital 65 of Directive 2019/1937 stresses that the Directive itself should not “[a]ffect the exclusive power of the Commission as regards the declaration of compatibility of State aid measures in particular pursuant to Article 107(3) TFEU”, meaning that the European Commission at all times has exclusive power to decide whether a financial action is compatible with State Aid and whether it serves a common European interest or remedy a serious disturbance. The Parex case provides a reliable argument not to give the European Commission this exclusive competence as a whistleblower discovered that the recipient of State Aid measures are Kremlin-linked oligarchs. 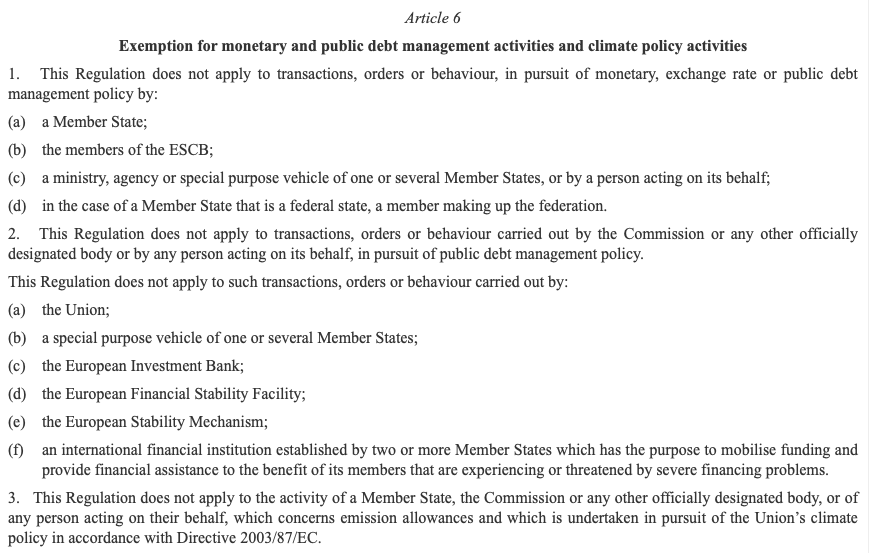 The European Bank for Reconstruction and Development, what is it?

The EBRD was founded in 1991, following the collapse of the Soviet Union. Its’ stated mission is to “[f]oster the transition towards open market-oriented economies and to promote private and entrepreneurial initiative”. Ever since, the EBRD has relied on capital contributions from the countries that are its shareholders. Currently, 71 countries, as well as the EU and the European Investment Banks are shareholders. Capital contributions vary, yet its largest shareholders are the G7. For example, the United States and Russian Federation have respectively made contributions of €3 billion and €1.2 billion.

Article 49 of the basic documents of the EBRD (p. 29) provides a distinctive feature: Freedom of assets from restrictions. This basically removes any legal constraints on the EBRD, that could hamper its’ operations. So long as this article is in place, any outside scrutiny of its’ financial dealings becomes nearly impossible. Given that 71 countries contribute taxpayer’s money to this development bank with a portfolio of €50.2 billion of assets, transparency may be appreciated.

Latvia and the 2008 financial crisis: facts versus narrative

In the book How Latvia Came Through the Financial Crisis, written by Anders Aslund and former PM Valdis Dombrovskis, Mr. Rimsevics is credited as a powerful force for introducing Latvia into the Eurozone and keeping Latvia’s deficit below 3 percent of GDP (see p. 68 ). This claim can easily be proven as a fraud by the 2018 Eurostat report on Latvia, referring to the guarantee call on p. 31. Moreover, it is alleged that Mr. Rimsevics has taken bribes from Latvian banks, resulting in joint cases C-202/18 and C-238/18 at the CJEU. In 2018, KNAB, Latvia’s anti-corruption authority, arrested Mr. Rimsevics on the suspicion of taking bribes from the Latvian banking sector. With the arrest warrant came a prohibition by the Latvian government for Mr. Rimsevics on performing his function. The CJEU judgement of 26 February 2018 held that “[t]he Republic of Latvia did not provide any prima facie evidence of the accusations of bribery which were the basis for the opening of the investigation and the adoption of the decision at issue.”, mentioned in §93 of the case. This suggests that any of John Christmas’ findings on Rimsevics have not been considered, for if it were, the counterfactual would lead to a very different conclusion.

Ilmars Rimsevics, up until the more recent judgement in case C-3/20 (title 5 of the final judgement), enjoyed full diplomatic immunity against alleged crimes committed in Latvia. At the moment, Latvian authorities have installed a process pending against him. Yet one key witness who could testify against him, Mr. Buimester, died on 19 August 2021.

After Parex collapsed, it was split up into Citadele and Reverta, with Citadele being the good bank and Reverta the bad one, see p. 28 of the Eurostat report. How bad? Well at least, Citadele is the good bank on paper. The problem is that the agreement of the EBRD to ‘invest’ in Citadele was subject to an illegal, secret put-option, which suggests that the assets were not as good as genuine investors could be convinced of. One could say that in a crisis situation, time needs to be spared and an investor must be found quickly, yet the story changes when large-scale fraudulent assets were known for years and is the reason a firm collapses in the first place.

Besides that, John stresses the role that auditing firms have played in the looted assets and subsequent cover-ups. For years, Ernst & Young approved the financial statements of Parex, until Parex’ collapse. That is, long after John blew the whistle on looting and fled with his family. In addition, EY was appointed to accomodate the liquidation of ABLV in 2018, to which many former Parex depositors reportedly shifted their funds as can be seen in the same source.

Currently, as visible on p. 53 of the Citadele Banka Annual Report of 2021, the EBRD holds a 25% stake in Citadele’s shares (on paper). Another major investor is Ripplewood Advisors LLC, holding a combined share of 52.2%. As much as it may seem a separate investor, it must be said that one of the Supervisory Board Members who works for Ripplewood previously worked for the EBRD with specialisation into complex equity transactions as apparent on p. 12, exactly the specialty required for a secret put-option. For a bank that has a secret put-option agreement with the Latvian state through the EBRD, bringing more than 50% of the shares in the sphere of the EBRD (more than just the 25%) seems a conflict of interest vis-à-vis taxpayers and competitors alike. The shareholder structure has not changed much since the secret put-option was exercised in 2014. Gradually, Ripplewood has reduced its stake as apparent from annual reports from 2014 to 2021, yet there are only four other large institutional investors (p. 53).

Whoever thought that Parex was the only bank that engaged in secret dealings, only needs to look at Latvia’s neighbour Lithuania. After the Parex split-up, its compliance officer, Arnis Lagzdins, moved to Ukio to occupy the same function in 2009. Both OCCRP and ByLine have reported on this. Ukio was found to have served as a Russian laundromat between 2008-2013. As with Parex, the EBRD engaged in a secret agreement with Ukio and the state, this time the Lithuanian one. The whistleblower who discovered the fraud has not made his full name public, as evident from this letter, addressed at Mario Draghi through multiple channels, PwC included. So far, the letter has never been answered. After Ukio was looted, Lagzdins became financial regulator for the Latvian government.