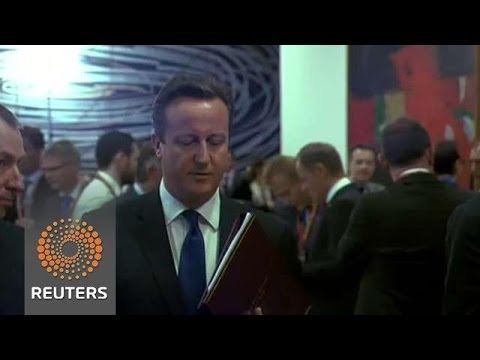 Despite opposition from the UK and Hungary, the European Council nominated Jean-Claude Juncker as the next President of the European Commission on 27 June. Eunice Goes writes on the attempt made by British Prime Minister David Cameron to block Juncker’s nomination. She argues that the strategy adopted by Cameron simply served to alienate potential allies and ultimately left the UK isolated in the negotiations.

In one of the many memorable moments from Yes, Prime Minister, mandarin-in-chief Sir Humphrey Appleby suggests some “masterly inactivity” to a premier who is determined to show there is a “firm hand” at the top of government. If in the past weeks a similar suggestion has been made by a real mandarin to the current occupier of Number 10 it looks like the advice has been supinely ignored.

Instead of practicing the important art of masterly inactivity, Prime Minister David Cameron has been conducting a hyperactive and quite ineffective campaign to block the appointment of Luxembourg’s former Prime Minister Jean-Claude Juncker as President of the European Commission. Like the fictional Jim Hacker, Cameron wanted to show resolve and principled firmness by blocking the appointment of someone he considers “totally unacceptable” to head the Commission, but doing nothing might have delivered outcomes closer to Britain’s national interest than Cameron’s rather undiplomatic offensive in Brussels.

The nomination of the new president was confirmed at a European summit in Brussels on 27 June, but even before the announcement David Cameron and his government had already managed to look weak, isolated and a bit clueless about how EU politics works. To complain in public, like the chancellor, George Osborne, did this week, that European leaders “are saying quite a lot of things privately which they are not saying in public” sounds unconvincingly naïve. Above all, it is unclear how such behaviour will help Cameron’s attempts to obtain the EU reforms he wants and needs.

The fierceness of his stance suggests that is an issue the PM cares deeply about, but it also shows that he is trying again to win the favour of his rebellious backbenchers. At the moment he counts on their support, but it will evaporate quicker than the foam on a cappuccino now that Juncker’s nomination has been confirmed. Cameron should know by now that every time he tries to appease the Eurosceptic wing of his party he weakens Britain’s position in Europe.

His 2009 decision to remove the Conservative Party from the European People’s Party (or EPP, the group in the European Parliament that assembles all the centre-right parties in Europe) had the effect of upsetting those – such as the German chancellor Angela Merkel – the PM depends on to deliver the reforms he needs to keep Britain in the EU. More importantly, he voted himself out of influencing European politics. The EPP brings together parties of government in Europe and as such it is an important network where a large amount of informal but important decisions are made. Had the Conservative Party been a member of that group, Cameron could have used backroom diplomacy to prevent Juncker from becoming the EPP’s “spitzenkandidaten” at their March meeting.

And now the prime minister’s European partners are beginning to show signs of impatience with the way he uses the threat of Britain’s withdrawal from the EU to obtain support for his agenda. Even Angela Merkel, who was already upset by his inability to prevent the German Eurosceptic party Alternative for Germany from joining the European Conservatives and Reformists group in the EP, told Cameron to stopmaking threats.

Not happy with upsetting Merkel, Cameron has also failed to build alliances with other member states. His only open supporter is the Hungarian prime minister Viktor Orban, who happens to be one of the most unpopular leaders in Europe. In fact, Britain’s stance appears to have strengthened Juncker’s position. As one Le Monde columnist said of Juncker: “The person who has as visceral opponents the British Eurosceptic David Cameron and the Hungarian ultra-nationalist Viktor Orban cannot be a bad guy.”

Cameron has also failed to keep an eye on the macro trends dominating European politics. Had he watched the European radar he would have known that reviving the old battles between federalists and intergovernmentalists is not a top priority for most of his European colleagues. EU arrangements have changed since the Lisbon Treaty and as a result the EPP’s alleged “power grab” was widely anticipated. Above all, most European leaders have little appetite for new treaty changes and want to focus instead on finding solutions for the Eurozone crisis, on which the future of the EU depends. It is precisely this endgame that explains Juncker’s nomination.

Eight centre-left European heads of government – including François Hollande and Matteo Renzi – officially backed the appointment of the Luxembourger in the hope that he will support the loosening of the Stability and Growth Pact rules and gently steer Europe away from austerity. As for Angela Merkel, she may sympathise with Cameron’s stance, but it was always highly unlikely that she would block a candidate that was overwhelmingly supported by her party and by her social-democratic coalition partner, Sigmar Gabriel.

The only hope for Cameron is that the appointment of Juncker may result in some concessions – as a consolation prize – in the negotiation of Britain’s terms of EU membership. In the meantime he might consider the virtues of masterly inactivity. In European politics it often brings better, if quieter, results.