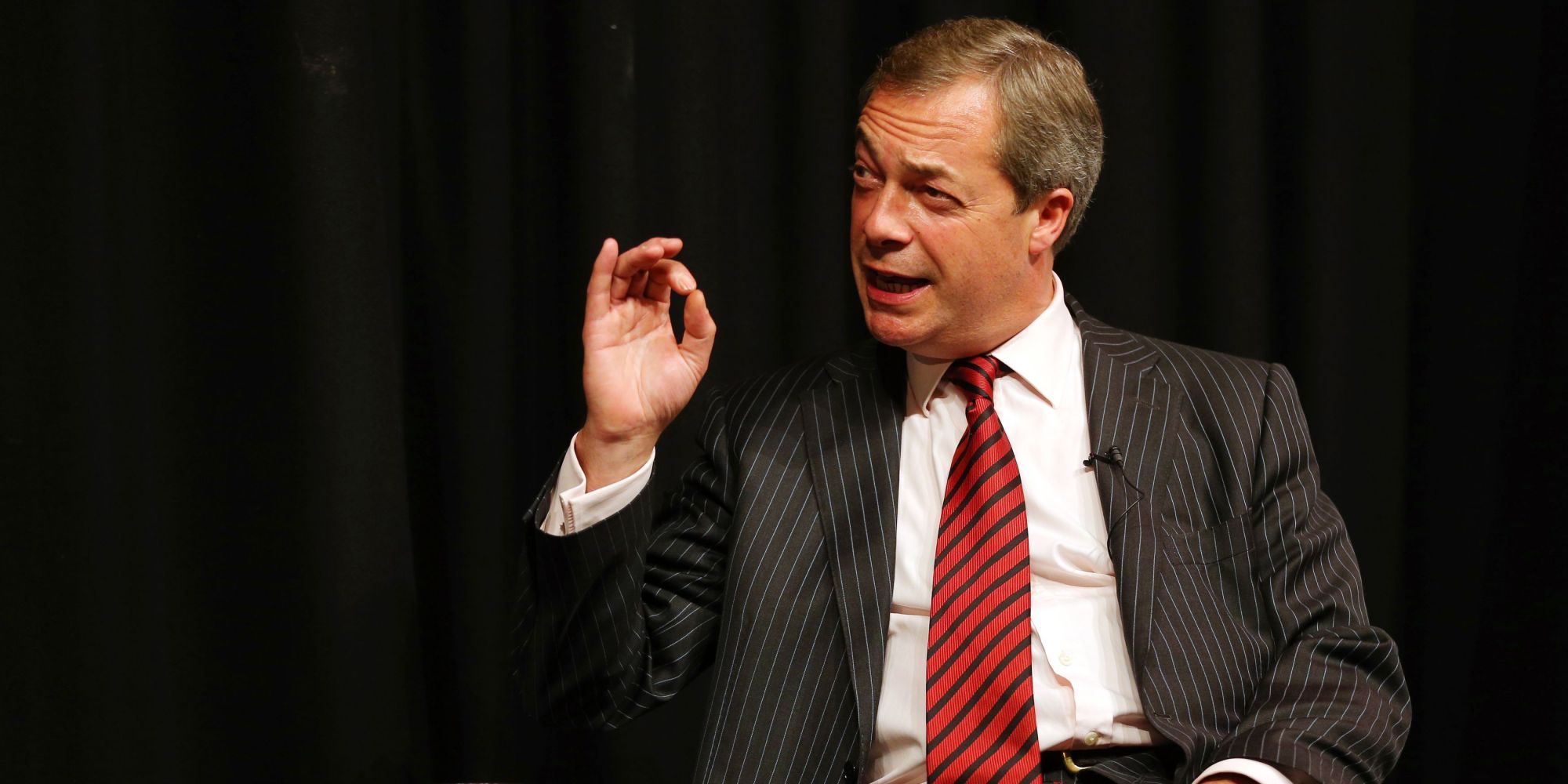 The United Kingdom Independence Party (UKIP) gained the largest vote share and seat allocation in the UK’s European Parliament elections. Tim Bale writes that while UKIP’s strong polling ratings prior to the election had already prompted David Cameron’s Conservative Party to take a harder line on immigration and the EU, it would be a mistake to respond to UKIP’s victory by adopting an even tougher stance on these issues. The experiences of the centre-right Austrian People’s Party (ÖVP) show why: shifting toward more restrictive policies in imitation doesn’t necessarily help to recapture lost votes – and may well scare off other voters.

If UKIP manages to do even half as well at next year’s general election as it has done this time, Britain’s mainstream parties are facing nothing less than a transformation in their competitive environment. Shielded for so long by first-past-the-post, they have never really experienced a truly serious competitive threat on their far-right flank. Even when the National Front and the British National Party experienced successes, they were short-lived and the threat they presented never came close to that posed by populist radical right parties in continental Europe. There, since the 1990s, the success of those parties’ anti-system, anti-elite and anti-immigration appeals has put mainstream actors, especially on the centre-right of the political spectrum, under significant, even existential pressure – pressure that has led many of them, after attempting in vain to dismiss the whole thing as a temporary problem, to adopt what one might call a ‘radical right-lite’ strategy.

We have recently begun to see the beginnings of something similar in Britain, particularly from the Conservatives – the party most immediately threatened by UKIP’s popularity. The Tories, of course, have a long history of restrictive rhetoric and policies on immigration, driven partly by their commitment to cultural continuity and national sovereignty and partly by their concern to show how much more in touch with public opinion they are than Labour or indeed the Lib Dems. UKIP’s rise, however, has prompted the Tory leadership to further sharpen its message on immigration, as well as on the EU. UKIP’s big win at the European elections will prompt calls for Cameron and co. to go even further in this direction.

Overseas experience – particularly from one crucial case – suggests, however, that they should think twice before following that advice. The centre-right Austrian People’s Party (ÖVP) has competed against the populist radical right Freedom Party (FPÖ) over almost three decades, giving it the time and the opportunity to run the gamut of responses, all the way from trying to play it down and put it down, through aping its appeals, to, eventually, a six-year coalition government. The fact that, despite some ups and downs, the FPÖ is still very much around, scoring nearly 21 per cent at the general election in 2013 and putting in a decent performance at the Europeans this year, should be a warning to anyone in Britain who thinks they have some sort of silver-bullet solution to the threat that UKIP poses to the Conservatives.

To begin with, the Austrian experience suggests that treating the populist radical right as some sort of pariah (‘a bunch of… fruitcakes and loonies and closet racists’, as Mr Cameron famously put it) is not ultimately a sustainable strategy – particularly if the centre-right’s efforts to do so are undermined not only by the media, but by people within its own ranks promoting the idea of deals with said pariah. Unfortunately, however, the Austrian experience also suggests that imitating the pariah’s policies and/or bringing it in from the cold doesn’t work either. Shifts towards a more restrictive immigration, integration and asylum policy don’t necessarily help to recapture lost votes – and they may well scare off other voters. Even worse, there is a distinct possibility that ‘banging on’ about the radical right’s signature issues only serves to prime voters to think those issues are even more pressing than they think they are already.

And then there is credibility. Experience from Austria suggests that drastic shifts on immigration and integration merely increase the electorate’s suspicion that mainstream parties are simply playing politics, making them less likely to believe they really care, let alone have any consistent, deliverable policies on the issue. Austria, especially in recent years, also shows us that trying to have it both ways – talking tough on asylum and ‘bad’ immigration while promoting integration and an open market for highly-skilled workers – may not help the centre-right much in this respect either, at least in the short term. No surprise, then, that the Conservatives’ attempts to do just that since 2010 seem to have made very little impression on those Tory voters who appear to have jumped ship to UKIP.

Austrian experience also suggests that such shifts stand little chance of converting many of those voters who would vote for radical right parties anyway. Since those parties can make a good claim to ‘own’ the issues of immigration, integration and asylum, adopting their agenda risks confirming rather than eroding their reputation for speaking truth to power. The Conservatives have and will always fail to outbid UKIP when it comes to its core issues because, like Austria’s populist radical right, it will always be able – and willing – to go one better. In fact, every step in its direction on the part of the Tories will allow UKIP, like the FPÖ, to point to its ability to influence mainstream parties to ‘do the right thing’, therefore making it worth voting for. Meanwhile, any mainstream party which takes too restrictive a stance may well be denying both the nation and itself the benefits of higher economic growth.

But it is not only its consequences for votes and policy that makes such a strategy hazardous. It has consequences for getting into and staying in government too. The ÖVP operates in a PR system; thus, if the FPÖ does well enough, then there is always a possibility of a centre-right/radical right coalition. The Conservatives, however, lack such a safety net – one that that might allow them, like some centre-right parties in other parts of Europe, to gain or hang onto power even with a relatively unimpressive vote share.

Conversely, the Tories need to worry about the possibility that cosying up to UKIP might hamper another deal with the Lib Dems, who (unless they really are prepared to be the gift that keeps on giving to their coalition partners) have probably conceded just about as much as they are likely to concede on immigration and Europe. In the longer run, and assuming, for the sake of argument, that a series of hung parliaments eventually produces irresistible pressure for a change of electoral systems, the Austrian experience suggests that co-option into coalition of the populist radical right is no more than a temporary solution anyway.

Given all this, the obvious lesson from Austria for British Conservatives is a simple one – but no less important for that. They should avoid investing too much time, effort and attention in desperately trying to cure a condition that, in all likelihood, can only be managed. UKIP can hardly be dismissed as a distraction. But nor is it going to be easy to dispose of – not if it continues to be well-led and well-covered by a fascinated media, and not while there are significant proportions of the electorate uncomfortable with the cultural, social and economic change which globalisation makes inevitable. After all, UKIP is no anomaly; it is the British example of a Europe-wide phenomenon to which no-one has yet found the answer, and maybe never will.

None of this means that a touch of rhetorical reassurance from the Conservatives to their worried former supporters won’t help a little – but only if it doesn’t lead to promises that can’t be kept or to alienating the many commercial enterprises (and indeed citizens) that thrive on cultural, social and economic change. Better instead to focus on what mainstream centre-right parties generally do best – managing the economy, providing public services that are sufficient without being extravagant, balancing the concerns of traditionalist voters with the requirements of business, and painting their centre-left rivals as profligate soft-touches who couldn’t organise the proverbial piss-up in a brewery – Austrian, British or otherwise.