Whistleblowers fulfill an essential role for any system to function in the long run, exposing frauds and conflicts of interest that hamper progress. Not least do they shed light on the shadow economy, as the Panama Papers, Pandora Papers and other offshore leaks have shown. It is therefore reasonable that legal updates have been made, both within Member States and at the EU-level, in an attempt to provide adequate protection against those who come forward about wrongdoings, whether at local or systemic level. At least that is the case… on paper. But practice is different, as will be demonstrated by this article.

This article is divided in two parts: Firstly, a brief description of EU Directive 2019/1937 is necessary to understand how whistleblower protections came into existence in the EU. Secondly, two whistleblowers demonstrate how the adoption of laws in line with the Directive, have created a false perception of safety. Part I focuses on Latvia, where John Christmas experienced first-hand what it is like to flee the KGB and its rogue elements, only to find out some people who prosecuted and chased him after are now running the country, as well as the EU. Part II focuses on Malta, where Maria Efimova discovered how corruption at the highest levels of the government keeps afloat multiple laundromats, through shell companies and shady financial connections.

Whistleblower protections have been in place in the EU for some time. For example, EU Regulation 596/2014 on Market Abuse and Insider Trading recognized a role for whistleblowers as described in §74, when used to expose offences of either of the two categories. Likewise, the EU Trade Secrets Directive (Directive 2016/943) was an important step in setting common standards in this regard, as Vandekerckhove points out. That directive protects commercial and trade secrets for the sake of R&D and innovation, yet does not apply to revealing illegal activities or misconduct, according to §20. Fast forward three years, Directive 2019/1937 came into being on 23 October 2019, providing an obligation to set up internal reporting channels within organizations as described in Article 8 and 9, external channels as given in Articles 10-14, and last but not least: protection against retaliation, as set out in Article 21.

Compliance with Directive 2019/1937 can be tracked at whistleblowingmonitor.eu. So far, eleven countries have adopted this Directive, meaning that laws have been made in accordance with the directive: Croatia, Cyprus, Denmark, France, Ireland, Latvia, Lithuania, Malta, Portugal, Romania and Sweden.

John Christmas is an American-born banker, who studied in Chicago before moving to Latvia to work at Parex Banka. He was appointed head of international relations. During his time at Parex, John discovered that part of the assets on its balance sheet were fraudulent loans, which the bank was making purposefully. Moreover, he found out that some loans were handed out to figures  within the Russian Mafia and other shady figures with links to the Kremlin. As early as 2004, John reported these frauds to the Latvian authorities. In particular, he entrusted minister of the economy Krisjanis Karins. Instead of recognizing Christmas’ findings and providing adequate protection, the exact opposite occurred: From that moment onwards, John Christmas would become the most vilified person in Latvia.

After Parex collapsed, it was split up into Citadele and Reverta, with Citadele being the good bank and Reverta the bad one, see p. 28 of the Eurostat report on Latvia from 2018. How bad? Well at least, Citadele is the good bank on paper. The problem is that the agreement of the EBRD to ‘invest’ in Citadele was subject to an illegal, secret put-option, which suggests that the assets were not as good as genuine investors could be convinced of. One could say that in a crisis situation, time needs to be spared and an investor must be found quickly, yet the story changes when large-scale fraudulent assets were known for years and is the reason a firm collapses in the first place.

Besides that, John stresses the role that auditing firms have played in the looted assets and subsequent cover-ups. For years, Ernst & Young approved the financial statements of Parex, until Parex’ collapse in 2009. That is, long after John blew the whistle on Parex’ frauds, and fled with his family. In addition, EY was appointed to accomodate the liquidation of ABLV in 2018, to which many former Parex depositors shifted their funds as can be seen in the same source.

Eurostat itself has denoted the reversal of this secret put option as a “(deficit increasing guarantee call)”, ironically written between brackets. The person who approved the fraudulent bail-out of an equally fraudulent bank, was then PM Valdis Dombrovskis was then PM Valdis Dombrovskis, as visible on page 11 and 12. In 2014 he was promoted to EU Commissioner, and is now responsible for ‘An Economy that works for people’. But which people? A closer look at his portfolio reveals that he is currently responsible for managing relations with the EBRD and the European Investment Bank. In light of the Parex scandal, it is an incredible conflict of interest: the EBRD must be aware of his approval of a fraudulent deal, and likewise he must be aware of the secret put options used by the EBRD since he approved the deal. But how much does such a put option cost? In the case of Parex, it was 22% of the ‘loan’, which boils down to around 22 million euros. But the real figure is even higher, as the Latvian government bought back this ‘equity stake’ in 2014 at a price of 88.2 mln euros and sold it to investors at 74.7 mln, seen on page 31 of the 2018 Eurostat report referred to above. This means the Latvians have at least paid €35 mln, on top of the cost of the bail-out itself, besides European taxpayers, all for a bank that has laundered billions.

Arno Wellens, Mauro Caterina and Stepan Komarnijckyj are among the few journalists who covered this topic when the put-option was activated. Wellens’ documentations even led to parliamentary inquiry in 2014, after which Eurostat confirmed the fraud. 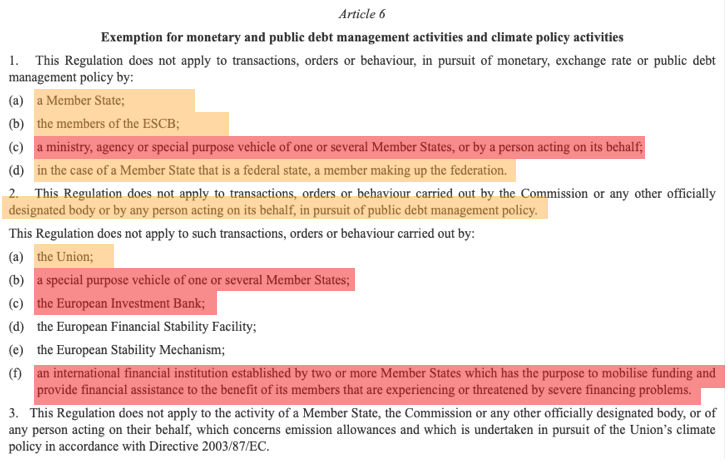 Article 6 MAR exempts certain institutions from market abuse prohibitions. Precisely the institutions in this situation are covered, as can be seen below, marked in orange, or in red if particularly relevant in this case. These exemptions make it all the more difficult to scrutinise the dealings, even though fraud has been thoroughly confirmed.

Above findings demonstrate how Latvia appears much more democratic and law-abiding than it is. It is a tale of cover-ups, with Eurostat and the European Commission included. EU law has been particularly friendly to these dealings, under Article 6 MAR. In fact, the portfolio of EU Commissioner for trade, Valdis Dombrovskis, almost entirely overlaps with that article. For someone who covered up the Parex fraud with the very parties specified in Article 6 MAR, the conflict of interest could not be higher.

Maria Efimova, a 39-year old whistleblower of Russian descent, worked at Pilatus Bank when she discovered a network of fraudulent off-shore companies, linked to several political elites. Founded in Malta in 2014 by Ali Sadr from Iran, the bank was known for its secrecy and usage of off-shore accounts. One of the beneficiaries was alleged to receive corrupt money flows from the ruling family of Azerbaijan, with Michelle Muscat allegedly being the Ultimate Beneficiary Owner of an off-shore company called Egrant. Maria is willing to hand over proof of the official documents naming the UBO of Egrant, provided she is granted whistleblower status. As Efimova discovered the corrupt dealings at Pilatus,  she was fired, while the bank still owed her 6,000 euros. Instead of paying her the remainder of her salary, she was sued for alleged embezzlement of 2,000 euros.

Egrant’s bearer shares were registered in Panama, yet the ability to freely circulate the shares among different legal/natural persons created a smokescreen.

The Egrant Inquiry is a 1,500 page report, diving into the origins of its shares and sources of income. It was conducted by the Maltese Magistrate Aaron Bugeja, who was promoted to judge by PM Muscat after the inquiry exonerated PM Muscat. Despite in-depth analysis, it has no conclusive evidence of the UBO. Its findings indicate that nobody else could be the UBO but Brian Tonna, the owner of Nexia BT. The rest is a mystery. Maria could change that, as she tried before with the help of Daphne Galizia. Not much later, in October 2017, Daphne was brutally assassinated. One of the self-confessed middlemen reported that 17 Black owner Yorgen Fenech, feared the information she was about to publish. At least three payments were made to 17 Black through ABLV totalling around €1.25 million, a Latvian bank blacklisted in 2018 for corrupt dealings with Russia, Iran, Ukraine and North-Korea, as well as Azerbaijan.

The following ten people are reported to be getting away with heinous crimes in Malta, and this includes officials connected to the assasination of Daphne Galizia or accomplice to it, according to an article from the Shift of 18 April 2022:

Malta, having adopted Directive 2019/1937 – which lays the burden of proof on employers to deny wrongful treatment in connection to a reporting person – has contained a provision in its law which excludes employers from this burden of proof when justified for administrative or organizational reasons. This setup can be seen in recital 97 of the Directive as well. According to Repubblika, it effectively deprives whistleblowers from the protection they are supposed to enjoy, and makes Maltese whistleblower law a “Trojan horse”.

John Christmas has personally affirmed that his whistleblowing story is similar to that of Maria Efimova, uncovering large-scale frauds, while the corrupt powers involved are still ruling till this day. The ABLV is, in many ways, a successor of Parex, whose frauds have been covered in part I. It demonstrates the interconnectivity of corruption within financial systems, and makes the similarities between John and Maria all the clearer.

We have covered two whistleblowers whose lives are in danger, involving countries that have adopted Directive 2019/1937. Above findings demonstrate how these jurisdictions deal with whistleblowers that forward information that the general public deserves to know. The results are shocking, and demonstrate the legal window-dressing that Malta and Latvia, among others, subject themselves to. EU countries have a long way to go in protecting whistleblowers, and it is a matter of hope, effort and a long breath, before all Member States have reached that objective.