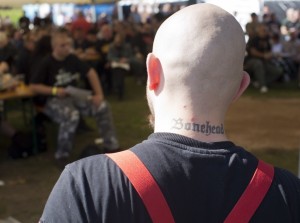 Over the past few months I have been evaluating the rise of far-right political parties across Europe and their potential impact upon the post-2014 European Parliament.

To form a political group in the European Parliament – a mechanism that unlocks access to vital speaking time during parliamentary debates and funding for party political research and campaigning – a group of at least 25 MEPs from seven countries must come together to sign a statement of joint principles.  While there have always been far-right MEPs in the European Parliament, efforts to form a hard-right group have historically been frustrated by a lack of a critical mass of extremists to make this possible.

I am increasingly of the view that the 2014 European elections will see enough far-right MEPs returned in order to make this happen.  Back in September, I last reviewed the polling position of far-right parties and concluded that, albeit narrowly, such a group would be possible.  I am now convinced it is.

It is clear that, in many EU member states, the rise of the far-right has been fuelled by economic and social collapse; something both the European Union and immigrant communities are being unfairly blamed for.

Assuming opinion polls in individual EU countries were to accurately reflect the electoral performance of far-right parties in the European elections next year, a far-right group could be formed on the following grounds:

Assuming the strength of the French National Front continues and each of the above parties record vote shares roughly comparable to current polls, it is more than likely that a far-right group would be quorate with somewhere in the region of 40-45 seats.

Indeed, given that the low turnout in European elections usually leads to the election of a number of surprising, fringe MEPs, it’s likely the far-right would secure even more MEPs than projected above. Possible contributors to this group include the Greater Romania Party, British National Party and Italian Tricolour Flame.

As we approach the Euro elections, I intend to keep an eye on this concerning trend.