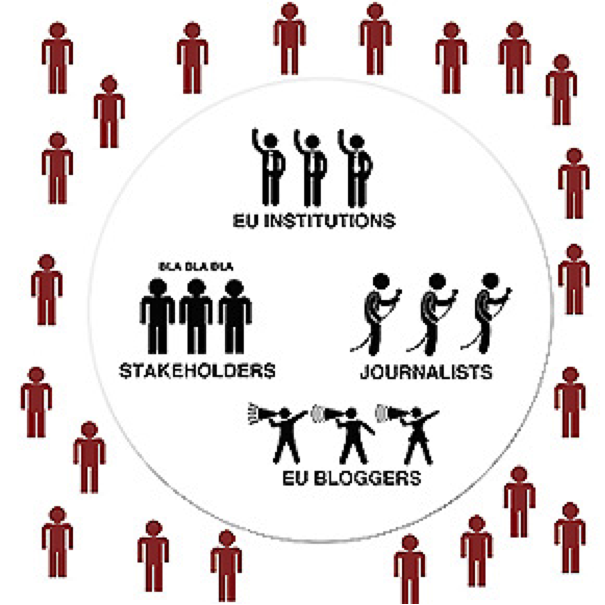 Internally-oriented communication initiatives and an overreliance on technical jargon prevent citizens from having a real conversation with the EU.

In the midst of the European Union’s on-going struggle to communicate its message and plug an ever growing democratic gap, a gift from heaven landed in Brussels: social networking. EU institutions created profiles on Facebook, Twitter, Flickr, YouTube, EUTube and even LinkedIn to communicate with their audiences. The information flows from them almost 24 hours a day, seven days a week, and engagement appears high. The Facebook page, for example, has hundreds of thousands of fans, and on micro-blogging site Twitter, many profiles are successfully pushing information out onto the worldwide web.

An analysis of Twitter shows that there is indeed a constant ‘push’ of information. However, this information typically consists of the details of legislation and in-depth analysis of parliamentary technicalities – subjects that a normal citizen cannot easily digest without extensive prior knowledge about European affairs. Instead, the people who benefit from the social media accounts of the EU are, in fact, residents of the Brussels Bubble themselves. Rather than providing a platform to EU citizens, those who were already interacting and conversing offline received a second ‘tool’ to showcase their skills; networking and holding highly technical conversations.

As the conversation within the Brussels Bubble is digitized, ‘normal’ citizens are excluded from debates and conversations delivered in highly technical ‘jargon’. In addition, language and technology barriers—approximately 50 per cent of European citizens cannot have a decent conversation in English, and one in four people have never used the internet—continue to keep the online EU sphere so tiny. In essence, social networking has seen the Brussels Bubble move online without expanding and becoming more inclusive.

However, do citizens really want a conversation with the EU? Distance and the perceived irrelevance of communicated information seem to be important factors explaining why citizens are not always interested in the conversation. The union does not offer products, but intangible services, which partly explains the non-interest.

This means that although the EU is currently failing to make a connection with its citizens, the channels for people to engage in online conversations and the opportunity to take advantage of this new medium to create a new conversation still exist. The message needs merely to be more clearly presented and made more relevant for its target audience, European citizens. The union has to unify its message, and therefore to communicate not via various accounts – like those of the European Parliament, European Commission and European Council – but via one EU channel. A lot of confusion is caused by the numerous accounts that all vary in both content and look and feel.

Above all, the conversation management principles developed by communications guru Steven Van Belleghem need to be taken into account and further fine-tuned. The customer experience – or in this case the ‘citizen experience’ – has to be stronger, more interactive and above all clearer. The citizen needs to be more involved in decisions and dialogues, in the most entertaining way possible. The channels are out there but, at the moment, the execution is almost non-existent. Instead of only talking to inhabitants of the Brussels Bubble, the conversation needs more punch, immediacy and openness to citizens. A citizen cannot be ignored via social media, but instead deserves an answer to her or his questions or remarks, especially the negative ones. Once people have received a fruitful answer, they will certainly show their appreciation. Taking advantage of the crowd to empower the message is the most effective way to communicate.

Directly relevant to that are bloggers. Trusted by their audiences as experts and opinion leaders, they are the ones who can act as information multipliers. As such, bridges need to be built with bloggers from different member states. It would, therefore, be prudent to reach out to bloggers who are writing about EU affairs in their own language. These bloggers reach a more niche but no less relevant audience. EU officials should track what is being written in these forums and provide extra background information to the writers. The authors would feel honoured that an important political body has picked up their blog and, as a consequence, might relay the message faster to a reader given that a independent third party source would be better placed to communicate content about European affairs.

The last aspect of an effective conversation-management strategy is to have good content. The union needs to get rid of its technical jargon and finally reach people with content that they are actually interested in. The Brussels Bubble has been carrying the conversation so far, but if European institutions are to legitimize themselves, they have to begin to respond to the needs of citizens outside this circumscribed public sphere.