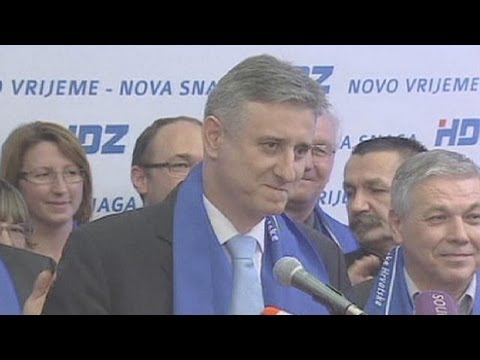 The coalition of the ruling Social Democratic Party of Croatia (SDP) came a distant second place in the country’s European Parliament elections behind the centre-right coalition led by the Croatian Democratic Union. Dejan Stjepanovic writes on the difficulties faced by the parties on the left of the political spectrum in Croatia following the elections. He argues that the dominant stories to emerge during the election were infighting in the SDP involving the country’s Prime Minister, Zoran Milanović, and the party’s general inability to tackle Croatia’s economic problems.

Croatia is an EU member as of last July. Because of this, it is also the only country in the EU to hold two elections for the European parliament in just over a year. These developments, however, cannot explain the current disinterest and voter attitudes towards the elections for the European Parliament. Despite the low voter turn-out, the last election seems to have caused something close to a tectonic shift not so much between the right and left (a cleavage that has been relatively stable over the last decade or so) but on the left and in particular within the ruling Social Democratic Party of Croatia (SDP).

The first ever Croatian election for the EU parliament was held in April 2013 and the outcome was the victory of the centre-right coalition led by the Croatian Democratic Union (HDZ), winning 6 of 12 seats earmarked for Croatian MEPs in that election (the number was reduced to 11 in the 2014 election). The HDZ is a member of the European People’s Party (EPP) in the European Parliament and is currently the main opposition party.

Although European elections are generally considered second order elections, the turnout was especially low at only 20.8 per cent. The argument often heard that the parties did not invest enough in mobilising voters for only a one-year term in the European parliament does not hold water. Both the governing SDP and the HDZ consider the European Parliament election not only as a way to gauge current support, but also as an opportunity to improve their standing in the country, something that was especially obvious in the election held on 25 May this year.

This last election for the European parliament saw a marginally increased voter turnout at 25.2 per cent. The outcomes were not so different from the previous election. The HDZ led coalition will have six representatives in the EU including Ruža Tomašić, a vociferous hard-line nationalist representing theHSP- AS (Croatian Party of Rights – Ante Starčević). The HDZ coalition won 41.4 per cent of votes. The SDP led coalition won 4 seats in the European parliament mustering 29.3 per cent of voter support. Two of the seats went to the SDP itself (a member of the S&D group in the European parliament), one to the Istrian regionalist IDS (Istrian Democratic Assembly) who will be represented by its experienced leader Ivan Jakovčić, the longest serving party chairman in Croatia. The fourth seat went to Jozo Radoš of the more liberal-leaning wing in HNS (Croatian People’s Party – Liberals) which is also a member of the ALDE group, just like the IDS. The Table below shows these results.

Table: Results of the 2014 European Parliament elections in Croatia

Note: Table compiled by EUROPP, not the author. Parliamentary groups may change subject to negotiations for the 2014-2019 Parliament – see here for an explanation of these groups. Only parties which won a seat are shown. The Croatian Democratic Union Coalition is a coalition of several parties, some of which sit in different groups in the European Parliament. As a result the combined vote share for the coalition is shown, but the seats are separated into the relevant parties. The same is true for the Kukuriku Coalition – although one of the three S&D seats went to the Istrian Democratic Assembly rather than the SDP. For more information on the parties, see: Croatian Democratic Union (HDZ); Croatian Peasant Party (HSS); Croatian Party of Rights dr. Ante Starčević (HSP AS); Social Democratic Party of Croatia (SDP); Croatian People’s Party – Liberal Democrats (HNS); Croatian Sustainable Development (ORaH).

One of the biggest surprises and successes of the election was the good performance of the ORaH(Croatian Sustainable Development) formed last year as a splinter party of the SDP. The party is run by Mirela Holy, a keen ecologist and a LGBT rights promoter. According to a CRO-Demoskop survey, she’s the second most popular politician (after president Josipović). Her success winning one seat and 9.4 per cent of the total vote is ever more noticeable not least because ORaH lacks infrastructure the more established parties could rely on.

Another relatively recent party Laburisti (Croatian Labourists – Labour Party) formed in 2010 (with six seats in the Croatian parliament) performed miserably, winning only 3.4 per cent of the vote –  well below the threshold – and losing the one seat they had in the European parliament in the previous term. ORaH’s success and Labour’s failures are symptomatic of the further divides happening among and within the left of the centre parties and Croatia’s left-right cleavages.

There are two relatively stable cleavages which correspond to voter preferences in Croatia. The first is a regional one: the HDZ coalition and a right wing populist HDSSB (Croatian Democratic Alliance of Slavonia and Baranja) that came close to the threshold, winning 6.9 per cent to capture most of the right wing votes. These parties rely on strong and unfaltering support in the southern and coastal region of Dalmatia and the eastern region of Slavonia.

These are at the same time the regions most affected by the 1991-1995 war. Further, these regional cleavages largely overlap with other factors that explain voter preferences. According to one study of lower income voters, those with lower levels of education tend to vote for the right and vice-versa. Economically better off areas around the capital Zagreb, northern Croatia and the westernmost relatively prosperous region of Istria (including Rijeka) tend to support the left of centre options.

The election results make even more sense if interpreted in the context of Croatia’s continued fall in GDP: in this quarter 0.4 per cent on a year-to-year basis. This year’s expected shrinking of the economy is between 0.5 and 1 per cent. Excluding two quarters of 2011, which witnessed sluggish growth of the economy, there has been a six year long recession. Undaunted, the deputy PM Grčić has argued the figures can be interpreted as a first step towards growth.

It seems that Labour, being the most populist among the left-leaning parties, also tapped into HDZ voters in the past, but this time HDZ closed its ranks and mobilised the party machinery. This can explain Labour’s relative defeat. Some of the protest vote likely went to HDZ, while ORaH instead took a large portion of SDP’s vote. The third option for the disillusioned left voters was to give a preferential vote to the SDP list. Tonino Picula, a former minister in the early 2000s SDP government, who probably evokes memories of the then popular PM Račan, the founder of the SDP, benefitted from this by gaining the largest share of the vote and securing a seat in the European parliament, despite being placed only fifth on the SDP list.

This is yet another confirmation of a well-known fact that Picula is not the favourite party member of current PM Milanović, who has recently called for changes in the SDP. Finally the sacking of finance minister Linić, in early May, a veteran of the SDP support from his home town of Rijeka which traditionally votes left, came to the limelight. Linić, waited until the end of election to unleash a salvo of accusations against Milanović including nepotism, embezzlement and authoritarianism within the SDP. It seems that Linić enjoys some support within the party headquarters which might cause additional turmoil and have a negative effect on the stability of the current government.

For the HDZ, victory in the European elections is a vehicle for demanding early parliamentary elections (which are otherwise to be held in late 2015). However, these demands are not as vociferous as expected. One of the reasons could be that later this year, presidential elections will be held. The incumbent president (stemming from the SDP) enjoys strong support and it looks like the HDZ does not want to enter the parliamentary election campaign too close to a presidential election, fearing possible effects on its performance.

Overall, this EU election was overshadowed by internal struggles on the left surrounding Milanović and the SDP’s inability to tackle economic problems, rather than by European issues. They were also a litmus test for the HDZ, which will be careful not to lose the obvious advantage it has over the squabbling left.