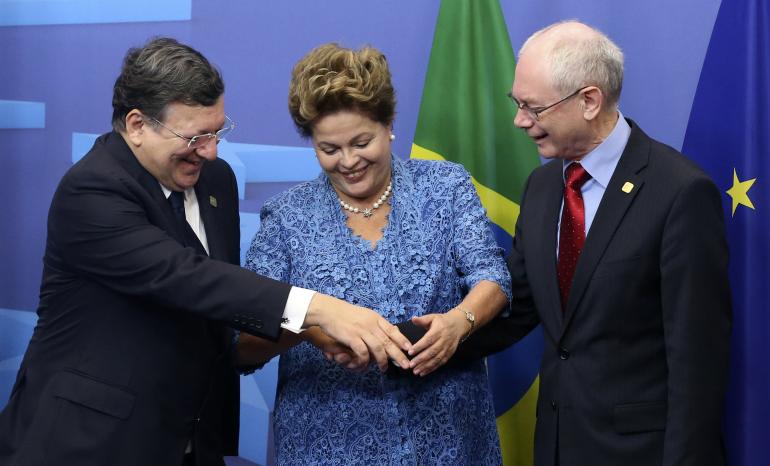 The World Cup is over, but the ball is still rolling between Mercosur and the Europe Union. This match began back in 1999, when the Mercosur-EU free trade agreement started between the two economic blocs. Since 2003, the conversations are paralyzed due to internal objections on which categories taxes would be reduced, particularly the size of reduction, and the deadlines to conclude tariff’s decrement.

From 17th to 21st of July, the leaving President of the European Commission (EC) Manuel Barroso was in Brazil for a diplomatic visit. There he participated in a number of conferences in the capital Brasilia and Rio de Janeiro. The high point was a political meeting with President Dilma Rousseff (PT – Worker’s Party) and other high-level politicians. As the legislative and executive body of EU, the EC has gone from a technocrat institution in the 70’s to an increasingly political role, where its democratic accountability is constantly questioned. Therefore, Barroso’s visit to Brazil is not a merely bureaucratic meeting, but what does it imply?

From Mercosur side, Argentina has been a main obstacle to conclude the agreement as it refuses to open more than 80% of its market. At the same time being the main economic partner of Brazil, fears an EU bilateral strategy to set trade agreements with other Mercosur members. This possibility was raised by Barroso at a conference in FGV (Fundação Getúlio Vargas – Rio de Janeiro), on July 21: “for me it’s an absurd that the Europe Union has bilateral trade agreement with everyone, but Brazil”.

In graphic charts below, the volume of export to the Euro Zone has decreased in 2012, but there’s a little recover during the first semester of 2014. This scenario is similar comparing Brazilian exports to Mercosur. However, the size of the European market is considerably bigger and presents more opportunities compared to the Mercosur partners, even after the 2008’s crises. The economic recession in Argentina, with an eminent risk of another debt moratorium — in a less harmful situation than in 2001, but yet distressing –, has been a great incentive for Brazil to invest in bilateral agreements and other multilateral organizations, particularly BRICS. This recently has resulted in a creation of a monetary fund as an alternative to IMF (International Monetary Fund), constantly criticized for lack of democracy, and particularly bad reputation in Latin America.

Chart with Brazilian Exportations to Mercosur (U$ Dollar)

Chart with Brazilian Exportations to Euro Zone (U$ Dollar)

The expectations to conclude the Mercosur – EU trade agreement negotiations before 2015 are very low. Mainly because of two reasons: internal disagreements in either Mercosur or EU camp; and political timing of Barrosso’s switch for Jean-Claude Juncker (EPP), who needs to form a whole new team for next term, with the approval of the European Parliament.

While Rousseff needs to focus on the presidential elections this October. Despite being in the leadership, the last straw polls have indicated low polls among her voters, with a constant popularity increase for her main opponent, the social democrat Aécio Neves (PSDB)1. Since the riots in June 2013, the Rousseff job approval had decreased significantly, even with the direct Lula’s support.

Accordingly to Neves, since Lula (2002-10) the foreign policy had gone in the wrong direction with strong left-wing solidarity in the Latin America, in particular with Venezuela. After a meeting with Barroso, in Rio de Janeiro, Neves advocated in favor of a trade agreement Mercosur-EU to expand the national market, which he considers is too much coordinated by Rousseff only with the neighbors, in a more ideological alignment than economic. Regardless, the candidate reinforced the necessity to delay the negotiations to 2015.

Either in Brazil or Europe, the actual scenario is quite uncertain. However, it’s undeniable that a match between both players is not close to an end, wherever Mercosur will hold the ball or not.