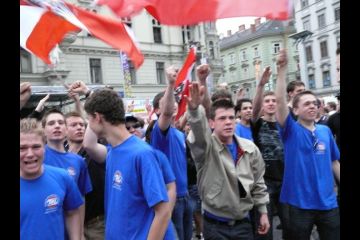 Right-wing nationalists of the Identitarian Movement held a rally in Vienna on May 17. Organizing themselves across social media, members of factions across Europe flooded in from France, Belgium, Italy, and Switzerland to join the Austrian faction to demonstrate against the EU.

To combat the protest, an anti-fascist group known as Offense Against the Right also gathered in the Austrian capital. As crowds became increasingly angry, police moved in to arrest protesters and separate the two opposing factions. VICE News was there to witness the clash of Europe’s new generation of extreme political movements.

Thanks to Vice News for sharing is caring.